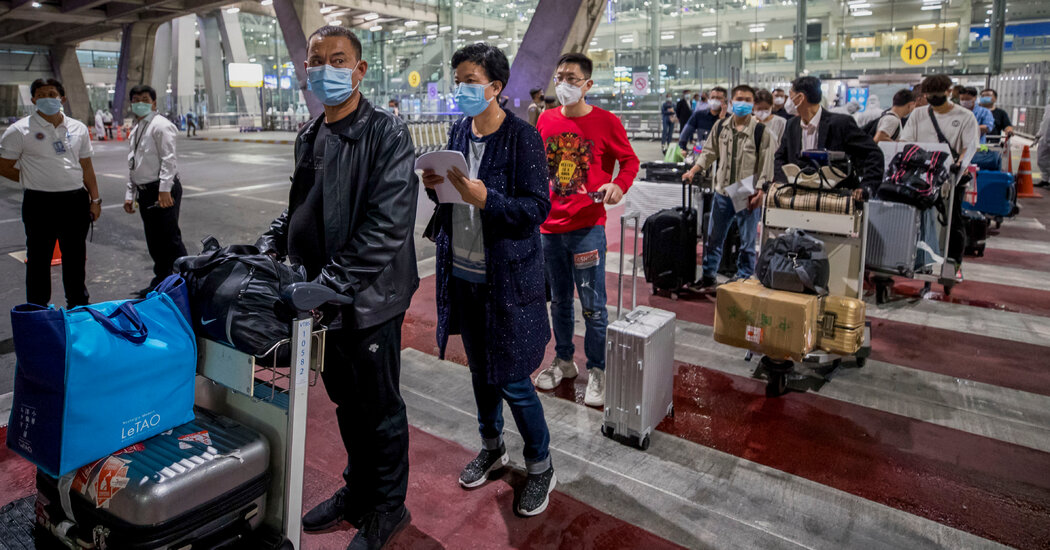 Thailand welcomed more than 10 million tourists from China last year. This week, tourism officials were pleased to announce the arrival of 39.

It was the first group of foreign tourists to arrive in the kingdom in more than six months.

Thailand took a big hit to its economy after it closed its borders to foreign tourists in April to contain the coronavirus. Officials have been trying for months to bring back tourists through a special visa and quarantine program and, after several false starts, the group of 39 arrived from Shanghai on Tuesday.

The travelers went directly into quarantine at a Bangkok hotel, where they will remain for 14 days at their own expense.

The governor of the Tourism Authority of Thailand, Yuthasak Supasorn, said in an interview on Wednesday that he hopes the group’s arrival will open the door to travelers from other low-risk countries, such as Australia, Japan, New Zealand and South Korea. The new visa allows stays of up to 270 days.

Thailand was the first country after China to report a case of coronavirus, which was brought by a tourist from Wuhan in January. But the kingdom has been among the most successful in containing the virus, reporting only 3,709 cases and 59 deaths.

The challenge now is to revive the economy.

During the second quarter of this year, Thailand suffered its biggest contraction since the late 1990s as the economy shrank by 12.2 percent, according to the state planning council.

Although tourists were barred, thousands of Thais returned from abroad and went through quarantine. Hundreds have tested positive without any reports of the virus spreading into the community.

“That is why we are confident in bringing tourists in at this time,” Mr. Yuthasak said.

For now, the arrivals may throw a lifeline to a few hotels that have set themselves up as quarantine centers, but it will do little to help the struggling tourist economy. Many hotels are closed, and others are operating at a loss to satisfy demands from their lenders.