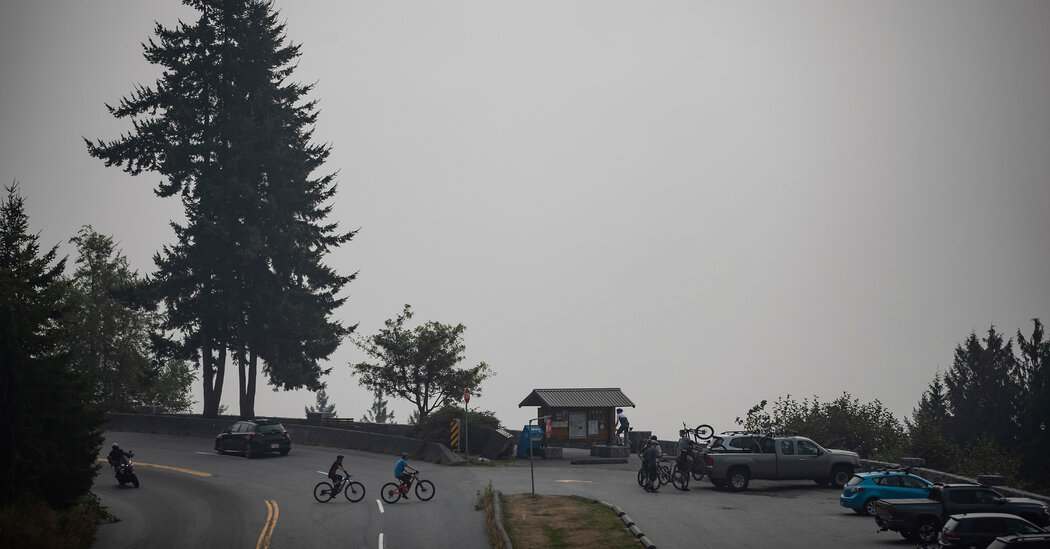 OTTAWA — Residents of Vancouver and other communities in British Columbia retreated indoors over the weekend as dense smoke from wildfires in the United States filled the skies, disrupting life in the Pacific Coast province.

The province’s air quality index — established largely to track the effects of national forest fires in the country — reached 10+, its highest rating for pollution, by Monday morning.

“You can actually smell smoke all the time and you can only see about two blocks now,” Chris Johnson, a lawyer in Vancouver, said on Monday morning. “It’s really bad, far beyond what usually comes from forest fires.”

Forest fires, which have been limited in British Columbia this year, often force residents in the province to shelter indoors. But the current retreat has been caused by smoke drifting from the United States rather than blazes elsewhere in the country.

Issa Arrian, a consultant in Vancouver, said that he was initially relieved that the province seemed to have escaped wildfires this year. But now, he said, the smoke has eclipsed 2018, a particularly fearsome forest fire season.

“We don’t have the fires but we have the smoke,” he said. “At least we could own the smoke in 2018. Now it’s like someone is throwing garbage on your lawn and you have to accept it.”

Mr. Arrian cut short an attempt at running on Saturday in part because he noticed how soot from the smoke was accumulating on outdoor furniture in the city. He also said he canceled a youth football practice where he serves as a volunteer coach.

Armel Castellan, a meteorologist with Environment Canada, the federal weather forecaster, said that significant relief from the smoke may not come to most of the province until next week.

“I’ve been in B.C. for 42 years and I’ve never seen this,” said Mr. Castellan, who is based in Victoria, the provincial capital.

While the flow of smoke from the United States is abating, he said, its unusual density is blocking the sun above British Columbia and significantly lowering temperatures. A major storm in the Pacific will need to sweep away that cool heavy air and the smoke inside it, he said.

The coast may get some relief on Thursday, but clear skies in the interior of the province may not come until Tuesday of next week, added Mr. Castellan. Until then, he said that the smoke may lower in density during the day.

Environment Canada urged people to avoid strenuous exercise and for pregnant women and people with underlaying and respiratory medical conditions to stay inside. The agency also posted air quality warnings on Monday for several places in Alberta along the border with British Columbia, including Banff National Park.

On Sunday, British Columbia’s largest teachers’ union suggested that recently reopened schools should be shutdown because of the combination of the smoke and the coronavirus pandemic. “Teachers and students should not be in crowded classes with no ventilation or fresh air,” it wrote on Twitter.

Over the weekend, streets in downtown Vancouver were as deserted as they had been at the beginning of the pandemic lockdown, Mr. Arrian said. “It feels like there’s no life in the city.”

A major fire on Sunday that engulfed much of a pier in New Westminster, a city that borders Vancouver, added to the smoke levels. Officials expect that it will continue to smolder for days.

Mr. Castellan, the meteorologist, said that the current smoke event and other recent smokey periods in the province are directly linked to climate change. “This is kind of a reality check,” he said. “Every year here we’re now seeing a smoke event.”

Fighting Between Armenia and Azerbaijan Risks Drawing in Bigger Powers