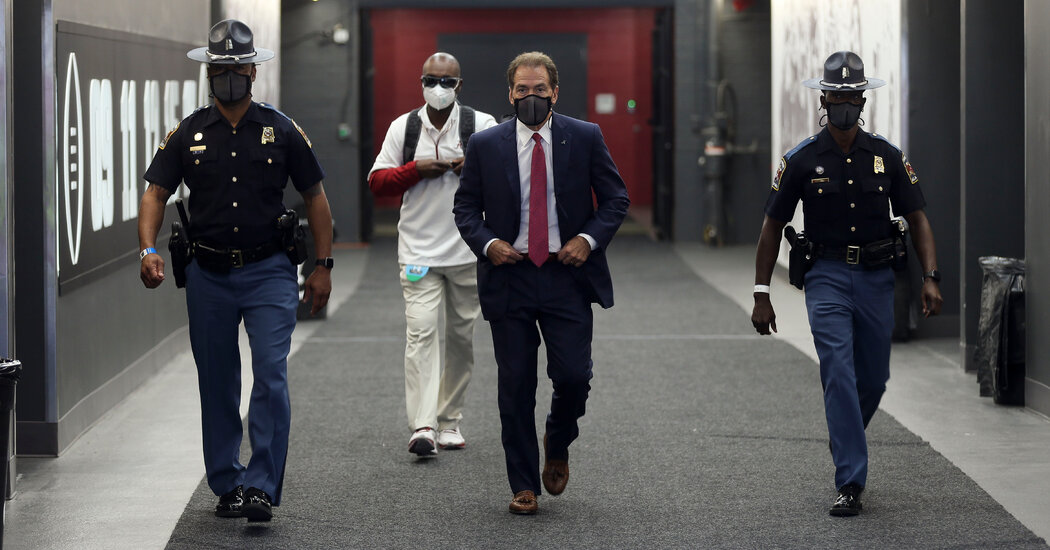 More than seven months into the nation’s coronavirus crisis, access to testing remains inconsistent, except among America’s elite. Count the University of Alabama’s football program and its coach, Nick Saban, among that elite.

Anchored by one of the most celebrated brands in college football — the university claims 17 national championships, including five during Saban’s tenure — Alabama’s athletic department is among the country’s wealthiest.

So at daybreak on Saturday, a private jet, the crimson “A” of the University of Alabama painted on its tail, lifted off from Tuscaloosa, Ala., en route to a testing lab in Mobile, with extraordinary cargo: cellular debris collected from Saban’s nose.

Three days earlier, the coach had announced that he had tested positive for the coronavirus.

With the case count around the football complex low and Saban an evangelist for masks and physical distancing, people in Tuscaloosa wondered whether that Wednesday test was flawed.

“I’m not saying it’s inevitable, but when groups like this test a lot, the chances for a situation like this to occur increase,” said Dr. Sarah Jung, the scientific director of clinical microbiology at Children’s Hospital Colorado.

On Saturday morning, still in isolation hours before second-ranked Alabama was to play third-ranked Georgia, Saban knew the specimen aboard the plane was his diagnostic lifeline to the sideline. If the Mobile lab reported that the sample was negative for the virus, Saban, who had asserted that he had no symptoms and had repeatedly tested negative after his initial result, would be allowed to leave isolation a week early and coach in the prime-time game.

And so it was. Hours after a final negative result — and with no small help from a rule change that Southeastern Conference leaders approved six days before the positive test that shocked Alabama — millions of people watched on television as Saban led the Crimson Tide to a 41-24 victory.

Russian Journalist Sets Herself on Fire and Dies, Blaming Government